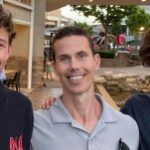 Ancient Strength: The Way of the Stone

What a disgrace it is for a man to grow old without ever seeing the beauty and strength of which his body is capable.”

-Socrates, as quoted in Memorabilia

Throughout history, many cultures around the world have held stone lifting challenges. There is an air of mystique around these challenges as much of the authentic history has not been recorded in written form, or even proven. It’s all told through tales from generation to generation. I think this is really awesome because, to me, it gives stone lifting a sense of awe inspiring wonder.

There is corroborating evidence to validate some of these tales of strength, though. We have clues in the form of inscriptions on stones, the placement of stones near structures of significance, and the placement of stones on “plinths”, platforms that are usually 3-4 feet high (perfect height for testing one’s ability to lift them in primitive times). One such Greek stone known as Bybon’s Stone weighs a svelte 143kg (315lbs) and bears the inscription “Bybon, son of Phola, has lifted me overhead with one hand”. Now that would be a world class lift, by any mortal!

The Legends of the Old World

The legends that exist around these stones are irresistibly intriguing. They range from Viking giants lifting massive stones straight out of the ocean onto beaches to Greek wrestlers like Milo and gladiators using them to train for battle thousands of yearsago. Legend or real, the common theme throughout history is that stones had definite value in training, they held religious implications, and they served as tests for rites of passage.

I’ve actually had the pleasure of traveling to Scotland and lifting many of its historic stones while I was there competing in the Highland Games. Scotsmen are known for their strength and fortitude in battle, especially the Highlanders in the northern part of the country who endured the most harsh weather and the centuries of brutal oppression from the English – think Braveheart and Rob Roy for an embellished, colorful historic reference.

In Scotland, men had to prove their strength and physical ability by lifting “Manhood Stones” (clach cuid firs in Scottish Gaelic). The stones served other functions as well. They were used to settle disputes between rival clans, as a way to train for battle, and as a way to build strength. One interesting use for lifting stones was pre-employment. Long before we had pre-employment fitness testing, the Scots used another type of stone known as the Clach-ultaich to see if a man was strong enough to do a job.

In Sweden, legend has it that a stone called the Norra Vi is required to be lifted in order to get married in their culture. Since that stone weighs 280lbs, I’m guessing that today many men would not be getting married unless they were allowed to use a forklift! This gives new meaning to the phrase “only the strong shall survive”. 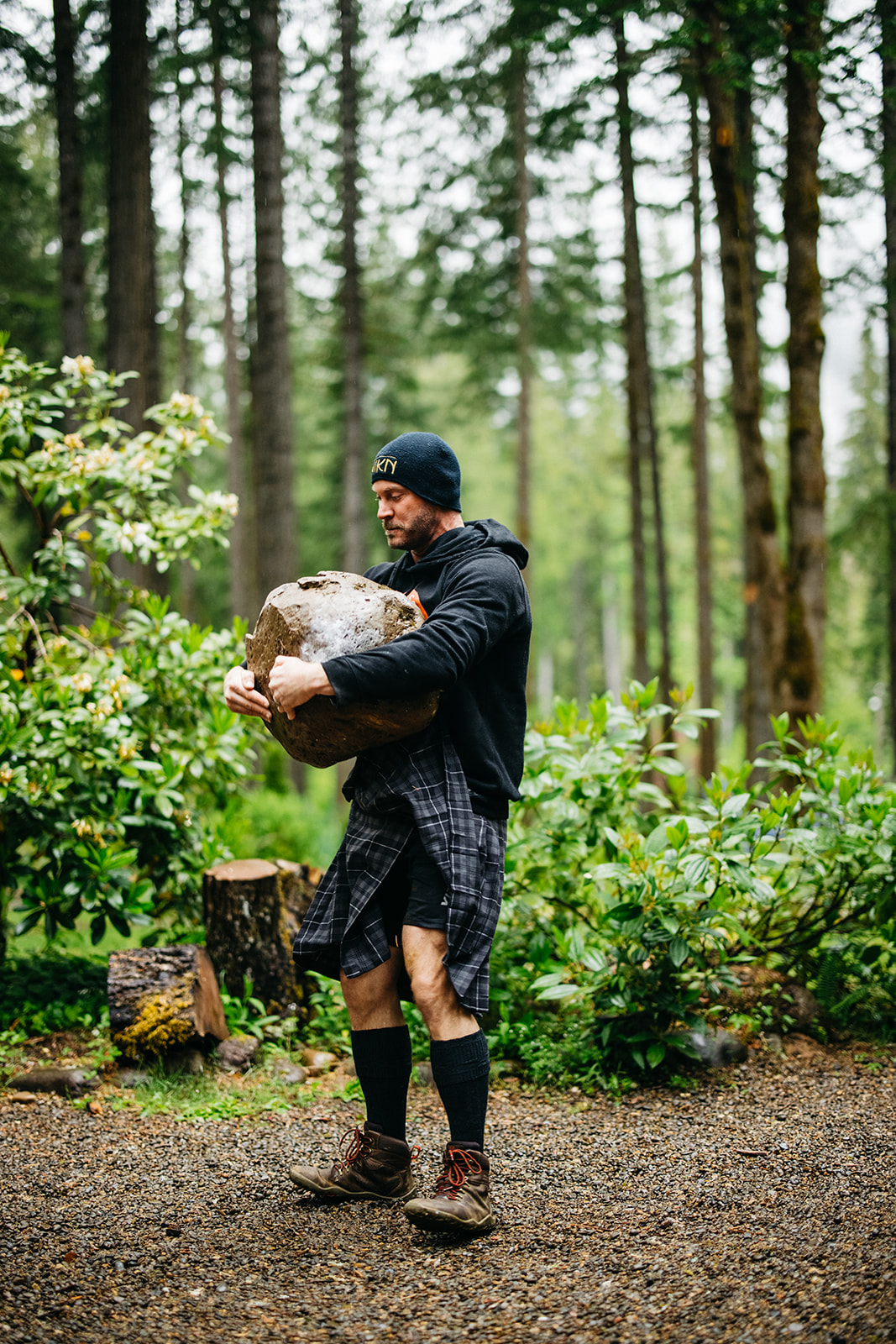 Here is John recreating the Norra Vi “Bachelor Stone” before his wedding recently in mountains of Oregon with this 251lb stone lift.

Icelandic culture has some very entertaining history and lore as well. Iceland is a sparsely populated, harsh, and cold land. It’s easy to see that they had to be strong-willed as well as physically capable. It’s also interesting to note that a disproportionate number of Strongman and Crossfit athletes have come from Iceland. Is it the societal value on physical strength or their Viking genetics at play? Or maybe it’s in the stones. The most famous of their lifting stones is called Kviahellan (more commonly known as the “Husafell stone”). It is an awkward 186kg (410lb) stone and legend has it that it was used as a gate to the sheep pen on the grounds where it lies. As the story goes, it was the farmer’s daughter who first carried the stone around the legendary 50-meter pen where it sits. That must have been some svelte, capable lady!

Another legendary set of Icelandic stones are known as the Dritvik Stones. They rest on Djupalonssandur beach and they were used to measure a man’s ability to work on a fishing boat. These stones and their ranking classifications are as follows:

To be honest, I love this kind of testing and training for myself, but I realize this doesn’t really fit or make sense for everyone else. After all, finding stones like this to test one’s strength or to train with is not only impractical, but it’s potentially unsafe. That’s why I really enjoy using sandbags (soft stones) with my clients as well as with myself.

A sandbag offers many of the same benefits of a stone, but it has a few advantages as well. For example, with a sandbag we can take a cumbersome object with dead weight and make it a little softer to grip and manage so we don’t have to worry about shredding our arms or smashing a finger or a toe. Trust me you don’t want to have this happen! (Ask me how I know…) Sandbags also offer the added advantages of adjusting the weight of our bag at any given time and the ability to use multiple bags to achieve a more focused training effect. This allows us the ability to train for ancient strength in a safe, progressive way. It also allows us to safely test ourselves should we ever hear the echoes of times long past.

If you’re curious about developing your Ancient Strength, I’ve got a 6-week sandbag training course coming out soon. It’s the perfect way to progressively unleash your strength potential. Like Socrates pointed out, we should dare to seek the beauty and strength our bodies are capable of expressing. 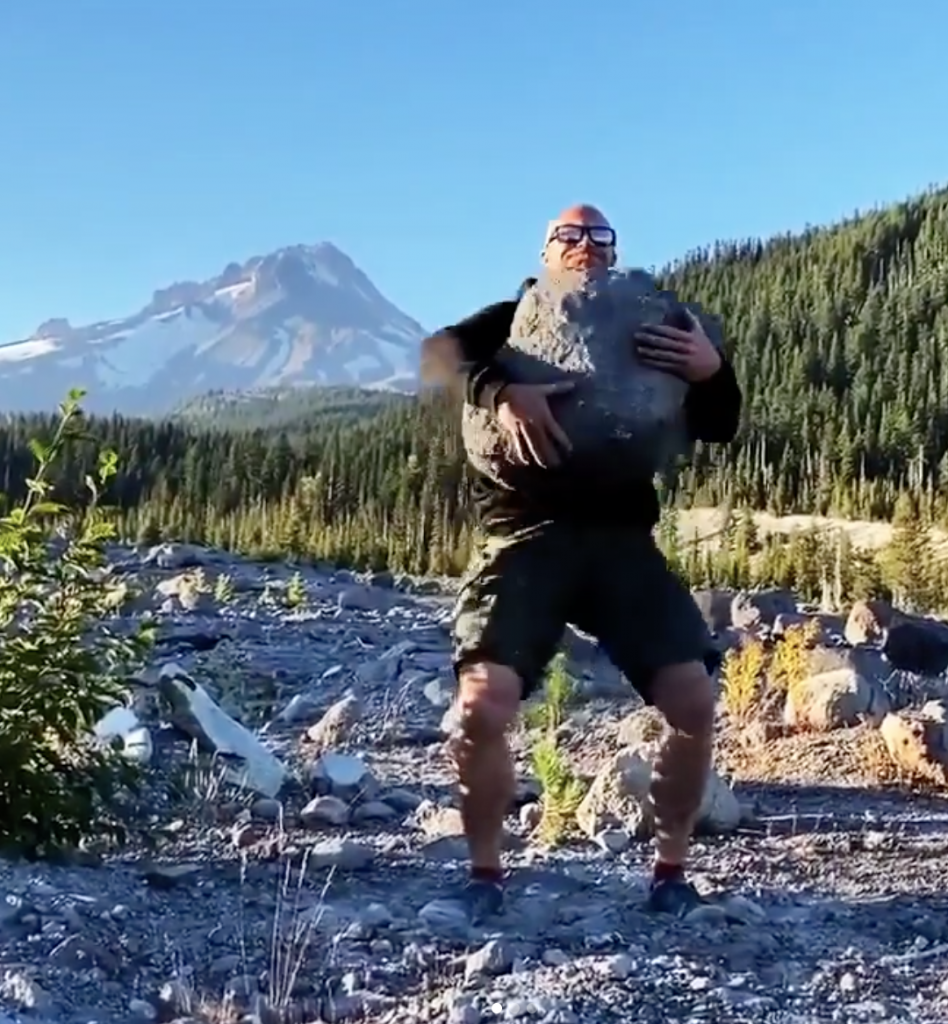 John Odden is an experienced strength coach and Original Strength Certified Professional, and a Highland Games World Record Holder based out of Bend, Oregon.

Since he was a child he has been fascinated with improving his health, fitness and athleticism. He was a tall, skinny, awkward kid growing up who always lacked confidence, especially in the gym. Unfortunately, some misguided enthusiasm resulted in chronic back and shoulder injuries that sidelined his athletic career and limited his quality of life well into his 30s. Unknowingly, these injuries and setbacks would be the cornerstone of his passion and unique perspective on how to teach others to live an empowered, pain-free, active life using the strength and movement principles that he has created and honed in his 20+ year career.

John is one of our OSi Online Coaches and has developed both the Crash Proof Course and his newest course, Odin’s Quest: The Journey to Ancient Strength.

Then you're going to want to snag a spot in our upcoming program - Odin's Quest: The Journey to Ancient Strength. 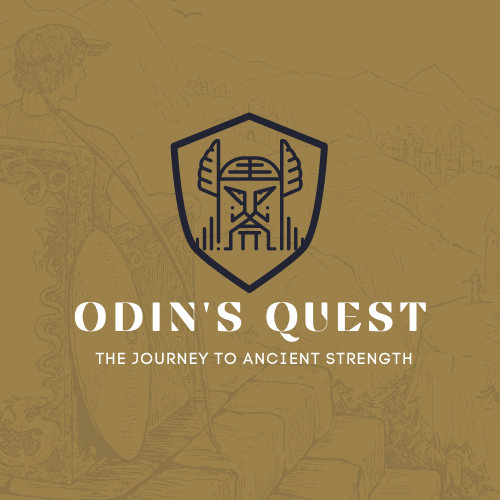 This 6 Week program will leave you feeling like a warrior and get you in touch with new tools and techniques that you’re probably not used to but your body will love, plus you’ll gain crazy amounts of strength. 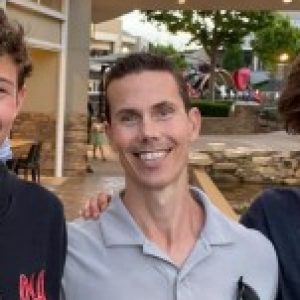